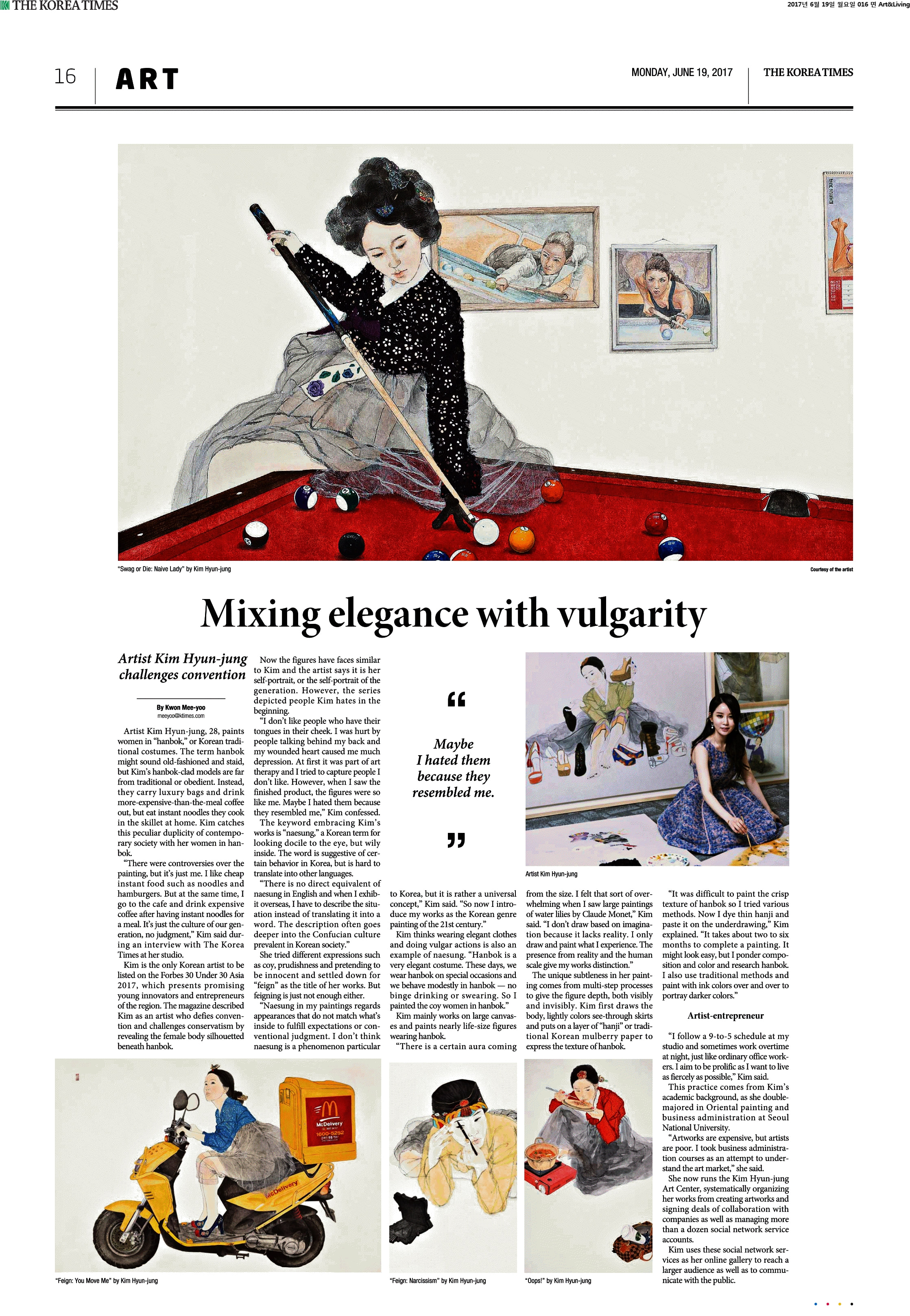 기사 전문입니다.
Artist Kim Hyun-jung challenges convention
By Kwon Mee-yoo
Artist Kim Hyun-jung, 28, paints women in "hanbok," or Korean traditional costumes. The term hanbok might sound old-fashioned and staid, but Kim's hanbok-clad models are far from traditional or obedient. Instead, they carry luxury bags and drink more-expensive-than-the-meal coffee out, but eat instant noodles they cook in the skillet at home. Kim catches this peculiar duplicity of contemporary society with her women in hanbok.
"There were controversies over the painting, but it's just me. I like cheap instant food such as noodles and hamburgers. But at the same time, I go to the cafe and drink expensive coffee after having instant noodles for a meal. It's just the culture of our generation, no judgment," Kim said during an interview with The Korea Times at her studio.
Kim is the only Korean artist to be listed on the Forbes 30 Under 30 Asia 2017, which presents promising young innovators and entrepreneurs of the region. The magazine described Kim as an artist who defies convention and challenges conservatism by revealing the female body silhouetted beneath hanbok.
Now the figures have faces similar to Kim and the artist says it is her self-portrait, or the self-portrait of the generation. However, the series depicted people Kim hates in the beginning.
"I don't like people who have their tongues in their cheek. I was hurt by people talking behind my back and my wounded heart caused me much depression. At first it was part of art therapy and I tried to capture people I don't like. However, when I saw the finished product, the figures were so like me. Maybe I hated them because they resembled me," Kim confessed.
The keyword embracing Kim's works is "naesung," a Korean term for looking docile to the eye, but wily inside. The word is suggestive of certain behavior in Korea, but is hard to translate into other languages.
"There is no direct equivalent of naesung in English and when I exhibit overseas, I have to describe the situation instead of translating it into a word. The description often goes deeper into the Confucian culture prevalent in Korean society."
She tried different expressions such as coy, prudishness and pretending to be innocent and settled down for "feign" as the title of her works. But feigning is just not enough either.
"Naesung in my paintings regards appearances that do not match what's inside to fulfill expectations or conventional judgment. I don't think naesung is a phenomenon particular to Korea, but it is rather a universal concept," Kim said. "So now I introduce my works as the Korean genre painting of the 21st century."
Kim thinks wearing elegant clothes and doing vulgar actions is also an example of naesung. "Hanbok is a very elegant costume. These days, we wear hanbok on special occasions and we behave modestly in hanbok ― no binge drinking or swearing. So I painted the coy women in hanbok."
Kim mainly works on large canvases and paints nearly life-size figures wearing hanbok.
"There is a certain aura coming from the size. I felt that sort of overwhelming when I saw large paintings of water lilies by Claude Monet," Kim said. "I don't draw based on imagination because it lacks reality. I only draw and paint what I experience. The presence from reality and the human scale give my works distinction."
The unique subtleness in her painting comes from multi-step processes to give the figure depth, both visibly and invisibly. Kim first draws the body, lightly colors see-through skirts and puts on a layer of "hanji" (traditional Korean mulberry paper) to express the texture of hanbok.
"It was difficult to paint the crisp texture of hanbok so I tried various methods. Now I dye thin hanji and paste it on the underdrawing," Kim explained. "It takes about two to six months to complete a painting. It might look easy, but I ponder composition and color and research hanbok. I also use traditional methods and paint with ink colors over and over to portray darker colors."
Artist-entrepreneur
"I follow a 9-to-5 schedule at my studio and sometimes work overtime at night, just like ordinary office workers. I aim to be prolific as I want to live as fiercely as possible," Kim said.
This practice comes from Kim's academic background, as she double-majored in Oriental painting and business administration at Seoul National University.
"Artworks are expensive, but artists are poor. I took business administration courses as an attempt to understand the art market," she said.
She now runs the Kim Hyun-jung Art Center, systematically organizing her works from creating artworks and signing deals of collaboration with companies as well as managing more than a dozen social network service accounts.
Kim uses these social network services as her online gallery to reach a larger audience as well as to communicate with the public. "People leave comments after seeing the work. Sometimes they interpret the painting better than I do and inspire me with new ideas. It's like collective intelligence," the artist said.
Her works are also often exhibited overseas as they present the people of Korea nowadays in a symbolic way.
"Kimchi and bulgogi are not enough to represent Korea. Those who exuberate over K-pop and hallyu like what Korea has now and my works show the life of Koreans now," she said.
The boundary of Kim's work has expanded to media art and 3D-printed sculptures, but still she is rooted deeply in Oriental painting. "I am thinking about my identity. Should I call myself an Asian pop artist? Does the term genre painting of the 21st century best describe my work?" she said. "I have worked on over 300 pieces of the naesung series and I know the preferences of people. But I will not settle for what people like. I want to be honest in my work and explore more possibilities through other media such as photography and installations."
Visit kimhyunjung.kr for more information about the artist.